Reconstruction or interpretation?
Professor, Head of Doctoral Program of the Hungarian Academy of Fine Arts, Budapest, Hungary
Please note that lecture available in hungarian only. 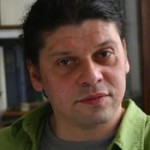 Zoltán Szegedy-Maszák was born in 1969 in Budapest, Hungary where he lives and works today. Graduated from the Hungarian University of Fine Arts first from the Painting (1992), later from the Intermedia Department (1994). Currently, he works as the director of the Doctoral School of the Hungarian University of Fine Arts and as a professor of the Intermedia Department.

His artistic approach can be characterised by experimentalism closely related to technical media. Szegedy-Maszák uses a broad spectrum of mediums in his artworks, from traditional chemical based photographical processes through painting and printmaking to interactive virtual- and augmented reality installations. Albeit his artistic approach is strongly based on media (an)archaeology and the creative applications of contemporary digital technology, his art became internationally known by his immersive installations from the 1990s, where the meaningful usage of special interfaces and digital technology made computer generated illusions explorable. His artworks combine cutting edge tools with anachronistic processes both in terms of technology and meaning; intentionally confronting the viewer with the (historical) determination of our world view by our depicting technologies.