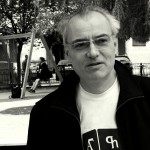 János Sugár (b. 1958) studied in the Department of Sculpture at the Hungarian Academy of Fine Arts in Budapest. Parallel with his studies he was actively involved in the exhibitions and performances of Indigo, an interdisciplinary underground art group. His work includes installations, performances, as well as film and video.
Sugár  has participated in national and international exhibitions since the mid 1980-ies, in 1992 he exhibited at the documenta IX, Kassel, in 1996 Manifesta I, Rotterdam. He completed an Artslink residency at the Cleveland Institute of Art in 1994, and in 98/99 a seven-month fellowship at Experimental Intermedia in New York. His films were screened in 1998 at the Anthology Film Archives in New York. He resides in Budapest.
Between 1990 and 1995 he was a board member of the Balázs Béla Film Studio in Budapest. In 1994, 95, and 96 Sugár organized the MetaForum Conference Series (with Geert Lovink and Diana McCarty). He has been teaching in the Intermedia Department of the Hungarian University of Fine Arts since 1990. (prof. DLA habil)