Why to start with film when we are thinking about preserving media-art?
archivist, Center for Audiovisual Studies (CAS),
Prague, Czech Republic 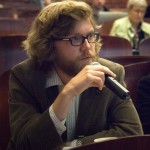 Matěj Strnad (1989) is a student and archivist at the Center for Audiovisual Studies (CAS), Prague, concerned with critical writing about film and media art and archiving thereof. He has published in various Czech magazines and journals and delivered lectures on topics such as film technology, archival dimensions of internet piracy or the role of traditional film medium in contemporary art. He has co-edited and co-translated the reader Manifesty pohyblivého obrazu I: barevná hudba (Pastiche Filmz, 2010), translating texts by Oskar Fischinger, James and John Whitney, Mary Ellen Bute and Stan Brakhage into Czech. Since 2013 he has been freelancing as external archival consultant for both public and private video collections. He has co-edited a social sciences reader aimed at students of visual arts (NAMU, 2014), set up a cataloguing and archival framework at CAS, and is engaged in establishing a film and media preservation MA programme at FAMU. Since 2014 he is responsible for digitization projects in the Czech National Film Archive.