Words fly away? (Archiving and publication of recordings at the Petőfi Museum of Literature)
Literary historian, researcher specialising in the lifework of Hungarian poet, Mihály Babits, Head of Department of the Audiovisual Library at Petőfi Literary Museum,
Budapest, Hungary
Please note that lecture available in hungarian only. 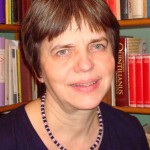 After obtaining a degree in Hungarian, French and Aesthetics from Eötvös Loránd University. She started working at the Audiovisual Library Department of the Petőfi Literature Museum, from 1987 assistant head of department at the same place. Between 1989 and 1995 associate research fellow at the Institute for Literary Studies of the Hungarian Academy of Sciences, then she returned to the Petőfi Literature Museum where she was appointed head of the Audiovisual Library in 2010. She has conducted more than 200 literary interviews, a part of which were published in journals, others in CD format or online in the form of virtual exhibitions called pimmedia.hu, and she has curated several literary exhibitions (e.g. Nyugat 100). She began doing research on Babits while at university. At present, she is actively involved in the comprehensive critical edition of Babits’ literary oeuvre. Obtained a PhD degree in 1999, her thesis was published under the title: The aesthetics of texts coming into being. A genetic approach to Babits’ poetry (1998). Another volume collecting her studies titled „Kit új korokba küldtek régi révek” Babits útján az antikvitástól napjainkig was published in 2008. From 1989, she is secretary of the Textology Committee of the Hungarian Academy of Sciences, co-president from 2000.